The Komombo temple is a fantastic twofold temple in the town of Upper Egypt named Kom Ombo. It was developed during the Ptolemaic tradition like about 180 to 47 BC. Some increases to it were later made amid the Roman period.

The structure is extraordinary because its 'twofold' plan implied that there were courts, corridors, havens and rooms copied for two arrangements of gods. The southern portion of the temple was devoted to the crocodile god Sobek, the spiritual force of world’s makers and richness with Khonsu and Hathor. Meanwhile, the northern piece of the temple was committed to the bird of prey god Haroeris which was usually called Horus.

Some Details of Komombo Temple

The temple itself had a particular religious philosophy. The characters summoned the Kom Ombo’s spiritual forces and their legend. Also, two themes were available in this temple: the local theme and the universalist subject. The two consolidate to frame the philosophy of this temple.

A temple was at that point built in the New Kingdom to respect these divine, but, this site became more popular in the Ptolemaic Kingdom. The Ptolemy VI Philometor started the construction of The current temple in between 180 to 145 BC toward the start of his rule and added to by different Ptolemies, most remarkably Ptolemy XIII Theos Philopator in between 51 to47 BC, who fabricated the inward and external hypostyles. The scene on the inner essence of the back mass of the temple is exceptionally compelling and presumably speaks to a lot of careful instruments.

A significant part of the temple has been obliterated by the earthquakes and the floods in the Nile, and later the constructors who utilised its stones for different tasks. A portion of the reliefs inside were mutilated by Copts who once used the temple as a church. Now, in September 2018, the government of Egypt announced that they had found a sphinx statue at the temple. Its measurement is 38 cm in height and 12 cm in width which is expected dates to the Ptolemaic Dynasty. 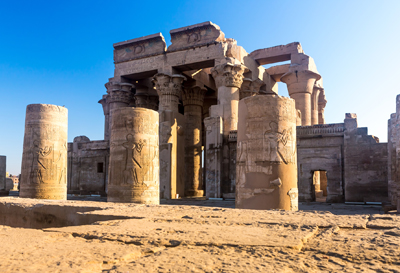